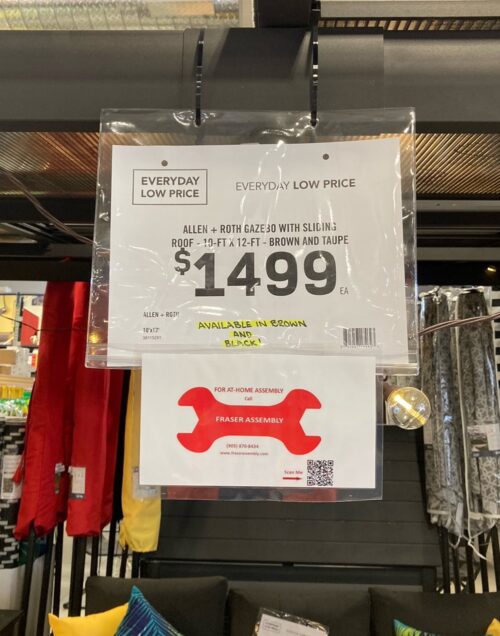 Your gazebo selection has details will that affect your enjoyment of the gazebo for years to come. Most important is gazebo size.

Gazebo Selection: More than one?

Will the gazebo be too close to flower beds, a swimming pool or trees that may do damage to the gazebo roof? Or will a position close to the pool or a barbecue fit in with your entertainment plans?

The sightlines to and from the gazebo determine:

When looking from the house to the gazebo is the gazebo framed by an attractive view? Does the gazebo help highlight your flowerbeds, shrubbery, trees, etc.?

Similarly, when sitting in the gazebo what will you or your visitors see? Will you be staring at a neighbour’s mess? Will you feel boxed in if your view is blocked by a fence?

What you can see of neighbour’s property may be overshadowed by what you can hear. If the gazebo is close to a neighbor’s property will you endure piercing screams of unsupervised children or drunken adults?

The surface that the gazebo sits on matters. The first concern is to anchor the gazebo to protect against high wind. (We’ve dealt with that in another post). Anchoring the gazebo on a wooden or concrete deck is straight forward. But, on grass or patio stones it may be necessary to drive rods through the feet of the gazebo deep into the subsurface. Our gazebo assembly team will deal with this.

If the gazebo will be on grass, is the surface level? Will guests be seated on an angle?  Will rain water flow through the assembly? If the surface is not already level our gazebo assembly team will deal with this also.

If the gazebo will be on grass, are you prepared for grass cutting around the legs of the gazebo and  your chairs? For this you will need a line trimmer even if you lay a floor on the grass.

Enjoyment of your gazebo will be enhanced with deco lighting. Battery lights are an option but hard-wired lights are more durable. For a dedicated circuit and plug(s) near the gazebo you will need an electrician. Contact your electrician during the early stages of your gazebo planning. He will advise how to comply with the building code and how to avoid other buried utilities. 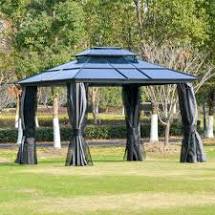 If you planning lights remember that evening use of your  gazebo will invite flying insects. Insect curtains are essential.

Consider the durability of your gazebo. The weak point is the roof. Exposed to sun, wind, snow and ice a typical fabric roof has a life span of maybe three years. A vinyl or metal roof will last 10 years. Consider this when calculating initial costs. A solid roof will also give better rain protection. 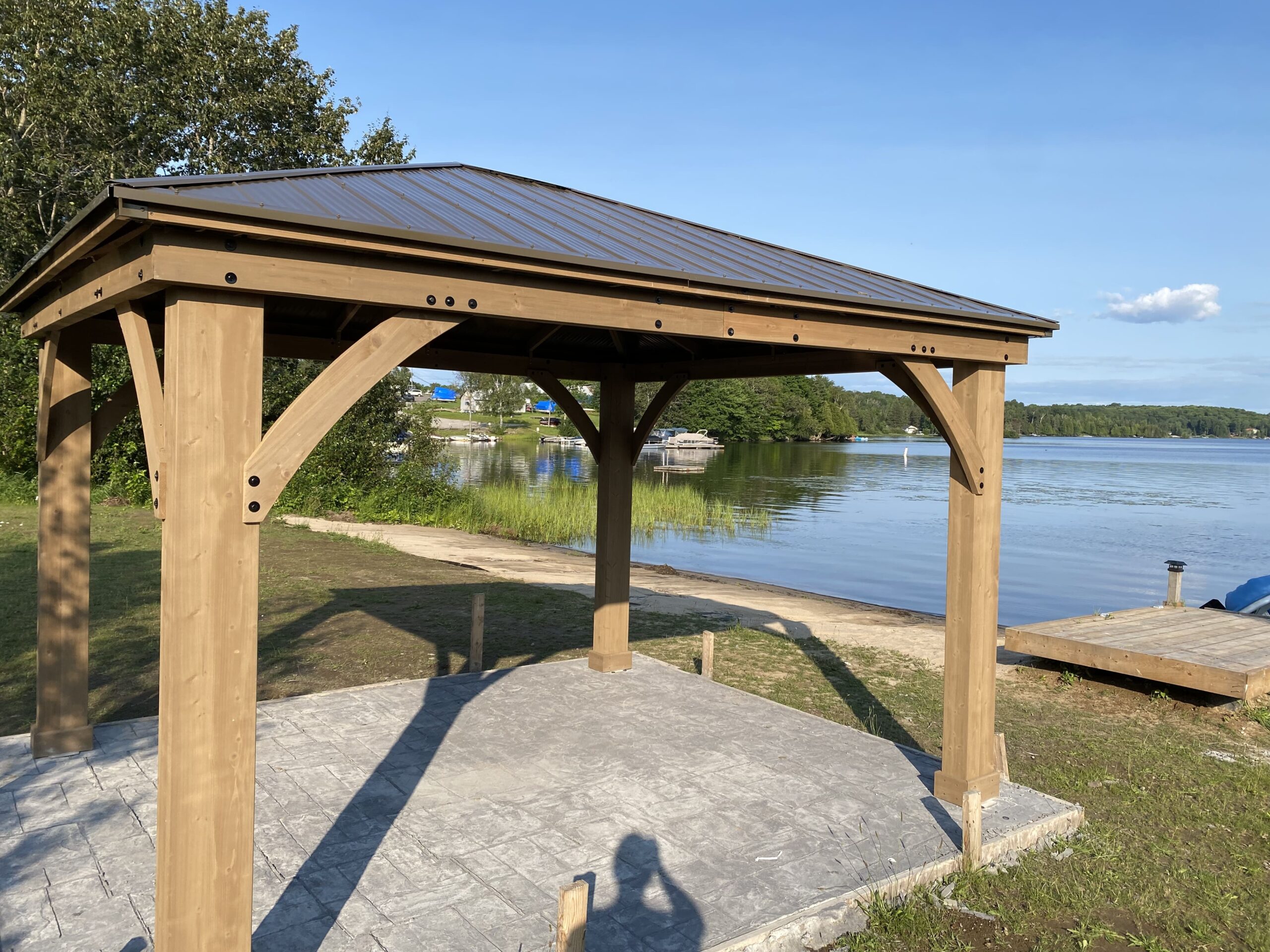 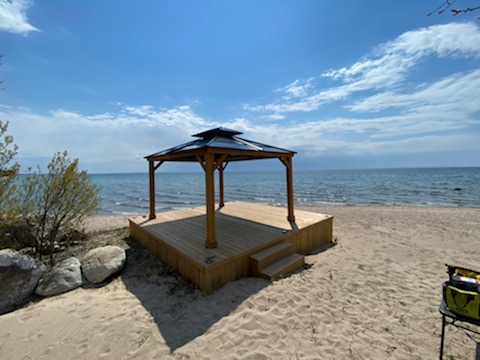 Few sites will be as picturesque as shaded seating by the water’s edge. A beach gazebo offers that & more.

Follow the link below to our Beach Gazebo video. Sit back & relax. 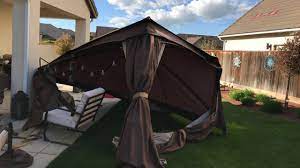 Protection from the Wind

In a strong wind the shape of a gazebo makes it resemble a kite. Even a heavy wooden gazebo can become vulnerable to wind damage. The wind may not completely lift the gazebo off the ground. But the wind can shift the gazebo enough to twist the frame or buckle the legs and destroy it. When that happens, everything close to the gazebo is at risk. Secure gazebo assembly requires a plan

GAZEBO ASSEMBLY: On What Surface?

Start with the surface the gazebo will rest on:

Gazebo Installation on a Wooden Deck

If upward wind forces the gazebo to lift, will the downward pull of the wooden deck be strong enough to overcome the lift?

Secure gazebo assembly on concrete is the easiest to achieve. No matter the wind strength, a concrete deck cannot be shifted by wind-driven uplift on a gazebo. Use concrete screws, (Tapcons) to attach the gazebo to the concrete. The instructions on the Tapcon packaging are simple. We normally  charge $25.00 for this service

Unless paving stones or interlocking bricks are cemented together they provide little downward resistance to the upward lift of a wind-driven gazebo. A secure gazebo assembly will use 3 ft rods drilled through the feet of the gazebo, through the paving stones, then through the subsurface material.

Get ready to secure your gazebo before you start the assembly. Identify the assembly surface and have the necessary long screws, Tapcons, rods, drill bits, sledgehammer on hand. It may be easier to have a qualified assembly service do this job. The assembler will have all the tools on hand to do the job properly without running around at the last minute looking for tools & parts.

gazebo Assemby Tip: How Much Does it Cost to have Secure Gazebo Assembly?

The costs of secure gazebo assembly are surprisingly low.